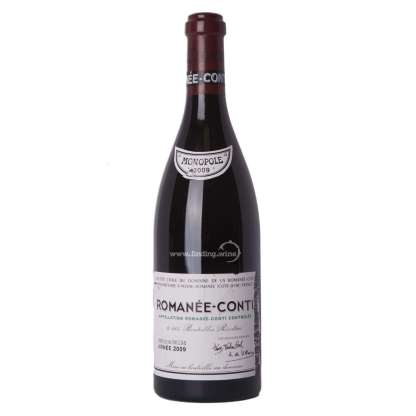 If you happen to get your hands on a bottle of DRC’s Romanée-Conti Grand Cru, make sure not to waste it on any old wine Wednesday. Depending on its vintage, a bottle of Grand Cru can fetch as much as $39,700 (like it did at a November 2013 auction in Hong Kong), making it one of the most expensive wines in the world. Want to procure some of this rare wine for yourself? Currently, you can secure a 2009 bottle on Finding Wine for a cool $19,640, or a 2011 version via Woods Wholesale Wine for $16,375.

Have you ever wondered what hundreds of millions of dollars can get you in the Los Angeles real estate market? Well, the answer is an 11-bedroom, 18-bathroom house situated on 11 acres of land with 40 garage spaces, a 75-foot pool, a tennis court, 5-bedroom guesthouse, and a 12,000-bottle wine cellar. The 1930s Chartwell estate, which was featured in the credits of The Beverly Hillbillies, is currently listed for $245 million, making it the most expensive home for sale—both now and historically—in the United States.

The Royal Penthouse Suite at Hotel President Wilson: $80,000 per night

Located on the shoreline of Lake Geneva in Switzerland is Hotel President Wilson, home to the world’s most expensive hotel suite, aptly dubbed The Royal Penthouse. For $80,000 a night, you can live in the lap of luxury with 12 bedrooms, 12 marble bathrooms, a Steinway grand piano, a jacuzzi and sauna, a fitness room, and a private elevator—just to name a few of the suite’s luxe offerings. And for more of the world’s best lodging, check out these 20 Hotels So Outrageous You Won’t Believe They’re Real.

“Like a life-giving light of the sun [the] Fazioli Gold Grand Piano will illuminate your home with the gift of wonder.” That’s how Euro Pianos describes the Fazioli 24K Gold Leaf Luxury Piano, one of the most expensive pianos—and overall instruments—in the world. As its name suggests, the piano is covered from head to toe—or from lid to wheel, rather—in 24-karat gold. It’s available to anyone with a spare half million dollars (and change).

You could fill your home with a flood of Christian Louboutins, but you still wouldn’t come close reaching the price of these diamond-encrusted golden heels. Each stiletto is lined with 118 smaller diamonds and finished with a 15-carat D-flawless diamond, so it’s little surprise the one-of-a-kind pair is on sale for $17 million.

The Golden Giant Burger at The Oak Door Restaurant: $914

From April 1 to June 30, visitors to the Oak Door Steakhouse at the Grand Hyatt Tokyo can experience one of the world’s most expensive hamburgers. Composed of a 2.2-pound beef patty, Wagyu beef slices, foie gras, black truffle shavings, and a gold-dusted bun, this monstrous meal—aptly named the Golden Giant Burger—costs just under $1,000. Each purchase comes with a magnum-sized bottle of your choice of Champagne or wine.

If you think Apple AirPods are the ne plus ultra of haute headphones, then you haven’t met the Sennheiser HE 1s. Development of these $59,000 electrostatic headphones took nearly a decade. Sennheiser says they deliver users “an ultra-high impulse fidelity 200 percent more efficient than any other solution currently available.” When one writer from Gizmodo listened to his favorite song on the headphones, he noted that he was “subconsciously trying not to move thinking that [he] might disturb the perfection of the sound.” And if you love expensive technology, then check out these Must-Have Tech, Toys, and Gadgets for Celebrating Summer Right.

Not only can you feel like a million bucks, you can smell like it too, thanks to Clive Christian’s No.1 Imperial Majesty perfume. At $205,000 for 500mL, this limited edition essence is easily one of the most expensive things on the planet. It’s not hard to see where this parfum gets its price tag from: The product itself is absolute oil, and the nest polished crystal that houses it has an 18-karat-gold collar with a five-carat white diamond in the center.

Have you ever dreamed of owning your own island? Well, what about the most expensive island in the world? In February 2019, Fox Business reported that Al Marjan Island—a 660-acre collection of four manmade islands near the United Arab Emirates—went on sale for a staggering $462 million. Included in the property listing are five-star hotels, private beaches, and retail facilities—all with zero personal and income taxes. To say that owning this island is a unique opportunity would be an understatement. And if you’re not ready to run your own island in the sun, you can always book a vacation on one of the 30 Most Magical Islands on the Planet.

That $5 bottled water at the movie theater sounds cheap in comparison to this $10,000 one from Beverly Hills 90H20. While the quality of the water surely contributes to the price, what really gives this drink its five-figure price tag is the bottle it’s housed in. The brainchild of jewelry designer Mario Padilla, it features a white gold cap set with more than 600 white diamonds and more than 250 black diamonds, altogether totaling 14 carats. Each $10,000 bottle also comes with four engraved Baccarat crystal tumblers and a one-year supply of Beverly Hills 90H20’s Lifestyle Collection water.

The next time you want to celebrate a big achievement—and we mean really celebrate—head to Serendipity 3 in New York City. The restaurant is home to the world’s most expensive sundae. At $1,000, the Golden Opulence Sundae is “three scoops of the richest Tahitian vanilla bean ice cream infused with Madagascar vanilla beans, covered in 23K edible gold leaf, drizzled with the world’s most expensive chocolate, Amedei Porcelana, and covered with chunks of rare Chuao chocolate.” Don’t expect to see this sundae on the menu, though; according to Serendipity, the decadent dish is “by appointment only.”

Birkin bags are, by any definition of the word, expensive. And yet, even they seem affordable in comparison to the Louis Vuitton City Steamer Crocodile bag. Made of authentic crocodilian leather, this LV signature bag sells for a casual $55,500, making it one of the world’s most expensive totes.

Every year, jeweler Harry Winston puts out a new design as part of the brand’s limited Opus watch series. In 2015, the iconic jeweler released the Opus 14, a patriotic-looking timepiece inspired by the 1950s. There are only 50 of these white gold watches in existence—and if you want to get your hands on one, you’ll need to save up some $600,000.